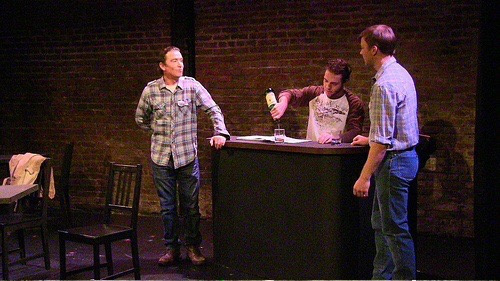 “This year’s Sheherezade is a tour de force of writing, directing and acting with a wide variety of short plays that showcase the skills of all involved, especially the versatility of the actors who play several roles in different plays. Don’t miss it!” –Goldstar Member

♦ |The Plays|  After Frank  by Patricia Milton  ⊕ Auto-Incorrect by Bridgette Dutta Portman  ⊕ Chrysomelidae Hide No More by Jennifer Lynne Roberts  ⊕ Indelible by Beverly Butler  ⊕ Laura and Curt: A Story of Love and Big Numbers by Rod McFadden ⊕ Piñata Fight by Elizabeth Flanagan ⊕ Romulus and Jewel:  A 10-Minute Travesty in Five Acts by Diane Sampson ⊕ Say Uncle by Mordecai Cohen Ettinger ⊕ Two to Five with Three Seconds to Go by Susan Jackson ♦

Hell hath no furry like the women Frank left behind in AFTER FRANK . Fleeting fame and scientific ambition affect a young romance in CURT AND LAURA: A STORY OF LOVE AND BIG NUMBERS and the missed chance to ride a heroic-win on the basketball-court out of small town poverty twenty years ago brings old friends to the Stinky Raccoon Saloon in TWO TO FIVE WITH THREE SECONDS TO GO.   In AUTO-INCORRECT Nate doesn’t have a chance with old high school crush Claire, an enthusiastic English teacher,  when his brain starts “correcting” his speech on their first date, but an unexpected similar interest bring two opposites together at the tattoo parlor in INDELIBLE.   W hen the line between art and life blur too close for her soon-to-be son-in-law’s comfort and daughter Midge sees the line, Madeline finds it hard to hide in CHRYSOMELIDAE HIDE NO MORE.  Athletic and tough Mei-Hua never did SAY UNCLE and she never will.  And while Maddy and Joe potentially ruin their daughter’s birthday and try to unravel the blame in PINATA FIGHT , the star crossed dog and cat,  ROMULUS AND JEWEL experience an instant and tragic inter-species passion surpassed by no-one except perhaps their masters’ ill-fated love at first sight.

“9-10 minutes plays […] All world premiers of local playwrights’ work by a local top-notch actors. Great direction too. Professionally staged in an intimate 60 seat cabaret theatre. 2 short plays stood out for me. ‘Indelible’–about a tattoo artist with anger management issues and a girl wants a butterfly on her butt. Funny and sweet. And then the crown jewel was ‘Romulus and Jewel: A 10-Minute Travesty in Five-Acts.’ Funniest wildest 10 minutes I have seen in a long long time.” –Goldstar Member

After Frank
Written by Patricia Milton
Directed by Laylah Muran

Laura and Curt: A Story of Love and Big Numbers
Written by Rod McFadden
Directed by Brady Brophy-Hilton

View all posts by LaylahM