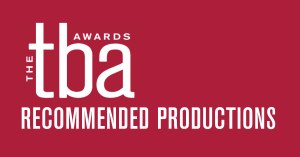 I can hardly believe that we are at the last weekend for the last Sheherezade!  It’s been 9 years since I was involved the first time with this annual short play festival.  I fell in love with it and it’s been a passion project for me since 2009 and something that I’ve seen grow from a staged reading of 12 short plays themed A Year in Review to a little-engine-that-could, short run, off-book production to what has become a critically well received, award nominated, fully designed and staged production.

“…a rich array of plays and a tour de force by directors and actors. The production fulfills the promise of this year’s fiesta because these plays embody the best of comedy, melancholy, challenge, love, and longing.” — Barry Horwitz, TheatreStorm 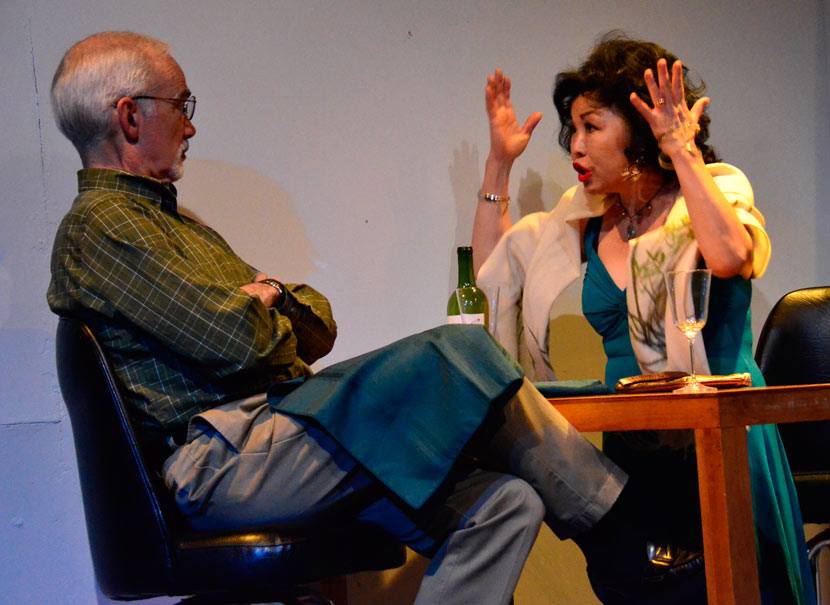 When I stepped down from producing at the beginning of the year, I thought I was saying goodbye to the show, and it broke my heart.  I’d made a proposal for transforming it into something else before I stepped down and really wasn’t sure where it was going to go.  I felt it was time to mix it up; 14 years with the same general concept seemed long enough. When Bridgette Dutta Portman and Jerome Gentes (co-producers) approached me about directing and let me know that it was in deed going to be the last in this format, I was excited to have a chance to stay involved and send this festival off one last time.

It’s been a completely different experience being the director and only peripherally involved in other aspects of the show.  The last time I directed, I was also producing, promoting, running front of house, (and got pneumonia) and felt that this lack of single focus was ultimately a disservice to the cast and myself.  It was well received and I’m proud of the work we did, but know that it could have been less difficult for everyone.  Being able to walk into the rehearsal room, collaborate with these fantastic actors and stay focused on directing alone felt like a luxury.

Collaboration has been a big part of the show this year.  Working with Bridgette and Jerome through their first outing as producers.  Spending time with my fellow-director Adam L Sussman (who directed the other four plays) to make sure we had a show that hung together as a whole aesthetically, was a great experience.  I learned a lot from him and hope to get an opportunity to collaborate again in the future.

As soon as I knew that one of the plays was going to require a segment of ballroom dancing I was excited to reach out to Wesley Cayabyab and work with him in a completely new light as well.  After years in the trenches producing the show and many others with Wily West it was great to get to play together in this completely creative way.  His choreography makes that section of the play funny and sweet in a way I would never have been able to pull off as gracefully.

The playwrights have all been great to work with and have been so supportive of the show, receptive to the inevitable “hey maybe if we tweak this a bit” feedback that comes out of the rehearsal room, and are in general just beautiful humans to be in cohoots with.  I loved bouncing ideas around with Genevieve on props and costumes, especially with STUFF WE KEEP and RORSCHACH TEST.  Where SPARSE has movement and dance, STUFF has props and … stuff that drives action and provides cover for the things we don’t say.

“I had a great time last night watching these wonderful plays. Each one had so much to offer and each was a masterfully constructed world. It felt so good on my brain.” — Sara Judge

I’m thrilled that we’ve received such a positive response and had a lovely review come out of opening weekend and are a TBA Recommended production. 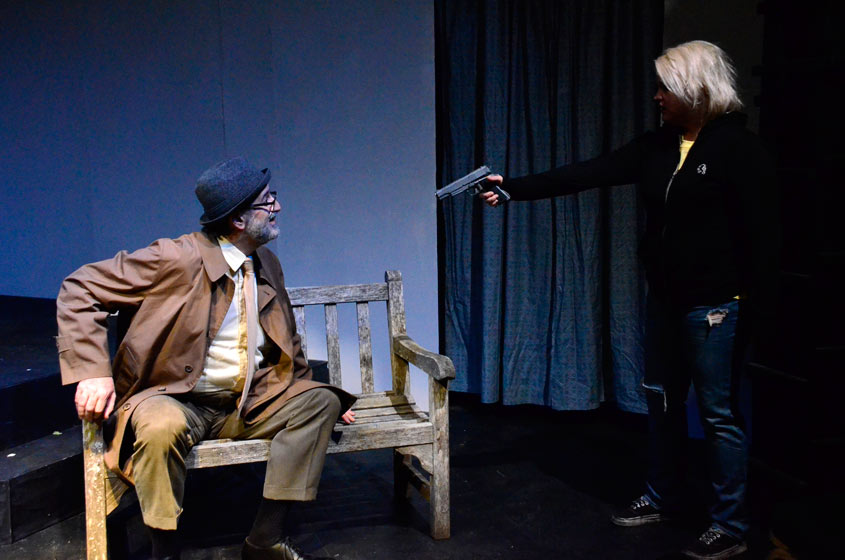 A 15-year tradition that brings together the talent of local writers, actors, directors and designers. The final year of SHEHEREZADE in its current form — hence, SHEHEREZADE’S LAST TALES! From zany money-making schemes and awkward first dates at 70, to buried pasts, dark secrets and the aftermath of war, these plays range from hilarious to sobering and bittersweet. 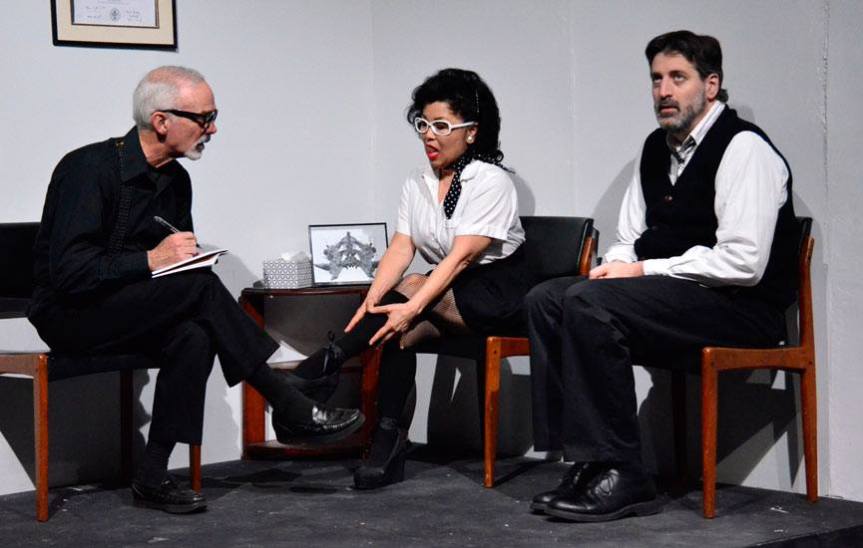 A CLEAN WELL-LIGHTED PARK BENCH, by Patricia L. Morin with Brian Levi (Saul) and Amber Glasgow (Kid)
An old Jewish man sits on a park bench talking to the moon as he reflects on his wife’s death when a young teenager with a gun attempts to mug him.

SPARSE PUBIC HAIR, by Lorraine Midanik with Rick Homan (Kenneth) and Miyoko Sakatani (Mildred)
Two older adults, both seeking casual relationships, meet through the Internet for an uncomfortable first date at a bar.

THE STUFF WE KEEP, by Rod McFadden with Alexaendrai Bond (Julie), Louel Senores (Bob), and AJ Davenport (Helen)
While cleaning out the basement of their deceased father, a brother and sister find a box of secret love letters to him, not from their mother. Should the letters be shown to their mother? In trying to decide this, the siblings uncover their own dangerous secrets. 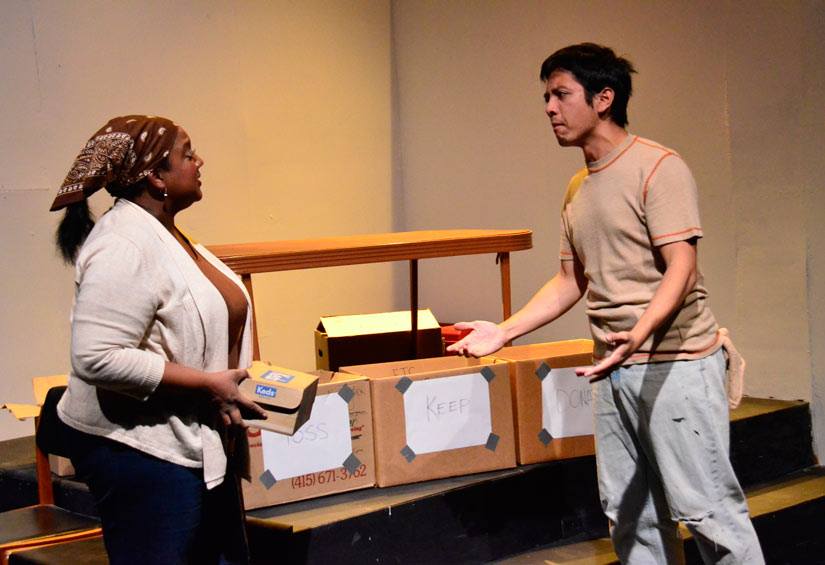